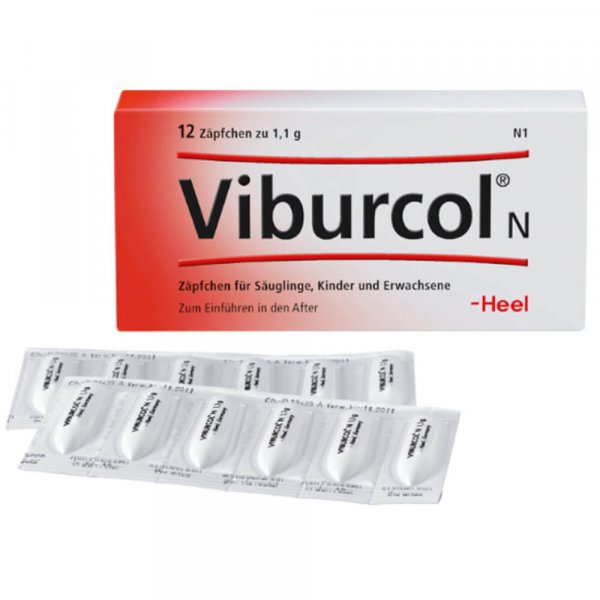 Rated 5.00 out of 5 based on 3 customer ratings
5 customer reviews

No parent with young children should be without Viburcol Suppositories natural calmative for restless infants and children! When a child has a common cold, struggles with teething, has a mild fever or a mild (upper respiratory) infection, Viburcol offers fantastic and natural relief. Ideal for kids who find swallowing oral medication difficult, or refuse to take ‘bad-tasting’ medicine. Since feverish disorders in young children often go accompanied by nausea and/or vomiting, rectal suppositories are a particularly effective form of administration. Viburcol’s action is based on Chamomile for restlessness, excitation, insomnia and hypersensitivity; Belladonna for fever, and 4 additional constituents indicated for various symptoms relating to tearfulness and irritability generally.

Viburcol Suppositories natural calmative for restless infants and children offers relief for restlessness, in teething problems and minor infections with or without fever. Babies and toddlers can get restless for all sort of reasons, medical and non-medical, so it’s great to have something in the cabinet that works and is 100% safe. Restlessness often is a symptom associated with increased temperature or fever. Painkillers and antipyretics such as Ibuprofen or Acetaminophen may reduce these symptoms relatively quickly, but, as you know, these should neither be used often nor over a longer period of time. That is why Viburcol is ideal for those first years: restlessness, tearfulness and irritability are reduced naturally and your child’s food and fluid intake (swallowing) problems improve. Viburcol also relieves restlessness and discomfort in the evening and can thus facilitate falling asleep. Sleep is when the body repairs itself.

Parents have been successfully using Viburcol suppositories for over thirty years and in more than thirty countries worldwide. Yes there is some research available on Viburcol and a rapid response in the BMJ may be of interest too. Viburcol N may be available from your pharmacy (PZN 676387; Registration number: U5677 (Act/Wet 101/1965) and you can purchase it from this website. Viburcol Suppositories natural calmative for restless infants and children is a complex homeopathic remedy to help with restlessness in teething problems and minor infections with or without fever in children. There are twelve suppositories per pack and each 1.1g suppository contains: Matricaria recutita Dil. D1 1.1 mg, Atropa belladonna Dil. D2 1.1 mg, Plantago major Dil. D3 1.1 mg, Pulsatilla pratensis Dil. D2 2.2 mg, Calcium carbonicum Hahnemanni Dil. D8 4.4 mg.

Atropa belladonna (Belladonna has been used in herbal medicine for centuries as a pain reliever, muscle relaxer, and anti-inflammatory, and to treat menstrual problems, peptic ulcer disease, histaminic reaction, and motion sickness)

Calcium carbonicum Hahnemanni (Calcarea carbonica is used to treat a variety of diseases and disorders such as acne , arthritis, vaginal discharges in women, night terrors in children, and ringworm on the scalp)

Matricaria recutita (Chamomile has been used as a mild, relaxing sleep aid, treatment for fevers, colds, stomach ailments, and as an anti-inflammatory)
https://www.ncbi.nlm.nih.gov/pmc/articles/PMC2995283/

In acute disorders insert 1 (torpedo-shaped) suppository into the rectum several times daily. After alleviation, 1 suppository 3 – 2 times daily. For infants (from the first day of life) up to 6 months of age, a maximum of 1 suppository twice daily. With high fever, it is permissible to combine Viburcol suppositories with other anti-pyretic preparations. Viburcol has excellent tolerance for infants, no known contraindications according to Biologische Heilmittel Heel GmbH.

Store Viburcol Suppositories natural calmative for restless infants and children in a cool, dry place (below 250C). Do not expose to direct sunlight. Prior to insertion check that the suppositories are firm and not soft.

How to insert Viburcol suppositories

It is easy and painless. He/she who inserts the suppositories washes his/her hands with soap and water (or use hand sanitizer) and dries them off. The recipient lies down on his/her side with the top leg slightly bent toward his/her stomach and with the bottom leg straight. Moisten the tip of the suppository with some K-Y Jelly, this makes insertion so much easier. If you don’t have lubricating jelly, apply a small amount of water to the recipient’s rectal area. Relax the buttocks to make it easier to insert the suppository (e.g. tell a story during the process). Insert the suppository into the rectum, narrow end first. Gently but firmly, push the suppository past the sphincter. The sphincter is the muscular opening of the rectum. For adults, push it in one inch. For children, depending on their size, push it in a half inch to one inch. And for infants, push it in about a half inch. The recipient then lies with his/her legs closed for a few minutes. If you are giving the suppository to a child, you may need to gently hold their buttocks closed during this time. Wash your hands right away with soap and warm water. 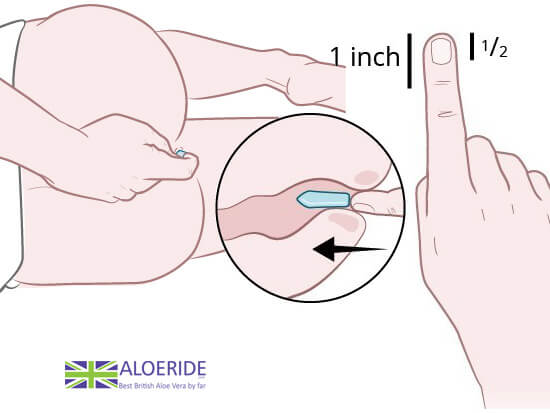 If the person who is inserting the Viburcol suppositories wishes to wear single-use disposable gloves, note that the allergen content of disposable rubber gloves varies widely and is higher in powdered gloves than in powder-free gloves and higher in examination gloves than in surgical gloves. IgE-mediated sensitisation to rubber proteins may affect the wearer of the glove, not the recipient of the suppository.