Our approach has always included vitamin D because it’s clear from good research and lab tests that people are (becoming) deficient in vitamin D and get into health trouble because of it. This isn’t a medical problem but a behavioural problem. Don’t know about you, but here at Aloeride we spend a lot of time inside buildings and, when we go outside, we remain well wrapped up until such time that Leicestershire is ablaze with sunshine. You may well recognise the scenario and during outside leisure activity only a modest exposure of skin to sunlight happens, we’re British…

The inescapable result of this is that one’s level of vitamin D throughout the majority of the year remains below a level where this prehormone gives you protection. To see the importance of this, click the chart below to enlarge it, and be amazed. Raising your 1,25(OH)2D3 is ONE of seven steps to shift the odds in your favour. 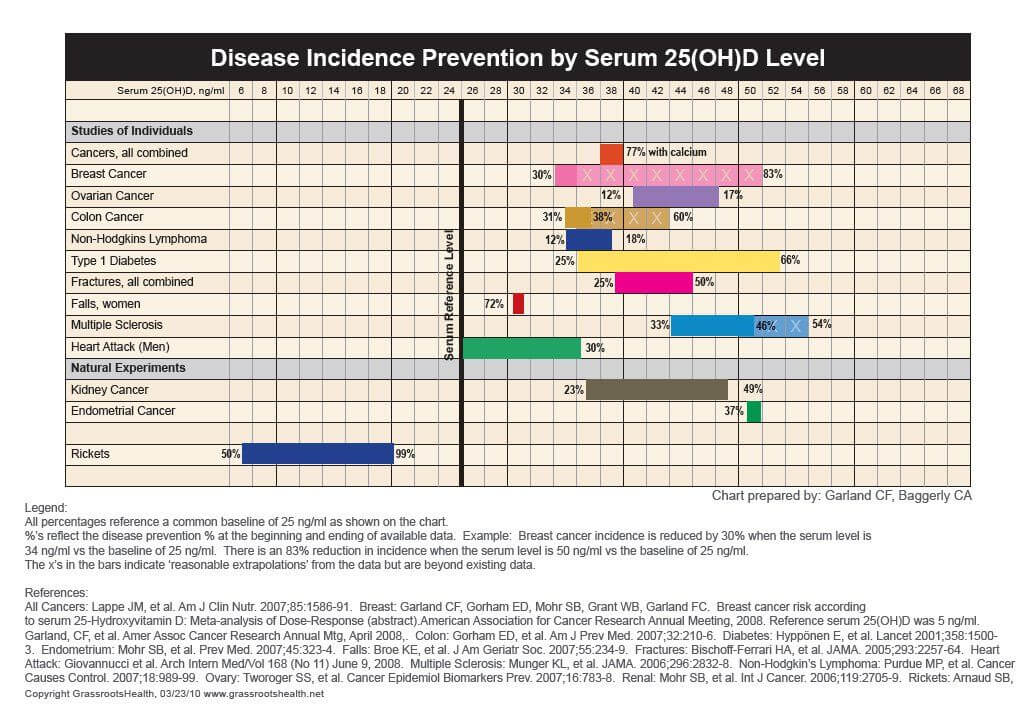 Since the late 1990s hospital doctors have been finding infants with heart failure, hypocalcemic seizure, delays in walking and rickets. These conditions are all caused by low levels of vitamin D. An infant’s level is usually low because the mother is also deficient, mothers give vitamin D to the foetus in the womb and in their breast milk after birth. Take-up of free vitamins (by people on low incomes and by pregnant women) under the Healthy Start programme (introduced not until 2006) has been less than 10%. In April 2015 a report by Britain’s Chief Medical Officer Dame Sally Davies again highlighted the rise in rickets, a disease that many people would have assumed died out in Victorian times, with one quarter of infants –more in some areas– deficient in vitamin D. Switch off the Nintendo, play outside and supplement wisely with a trusted brand!

Of course diet isn’t the only one thing that changed dramatically since WWII… abrupt e.g. holiday exposure to ‘foreign sunshine’ also is a post-war trend. Still, other than sun exposure warnings to an extent barking up the wrong tree, they contribute to blood levels of this prehormone dropping below a level that would improve your odds. By now vitamin D deficiency is recognised as a global epidemic no less. A meta-analysis published in 2014 in the British Medical Journal concluded: “Despite levels of 25(OH)D strongly varying with country, sex, and season, the association between 25(OH)D level and all-cause and cause-specific mortality was remarkably consistent”. With a simple, safe and inexpensive solution to hand, our approach is, why run the risk of low circulating levels?