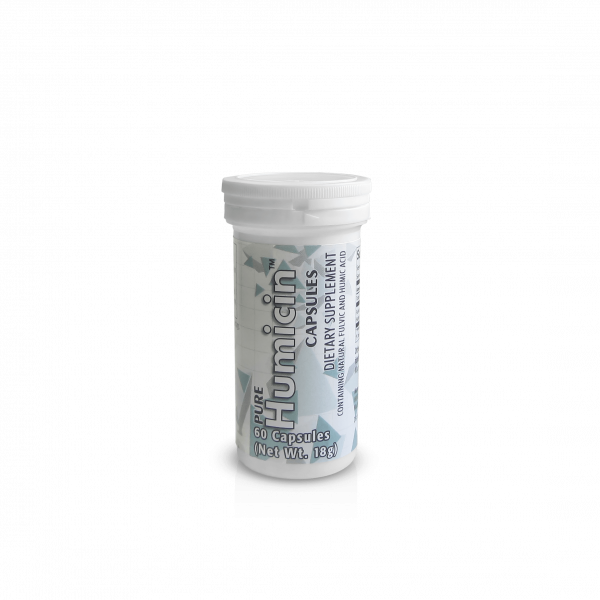 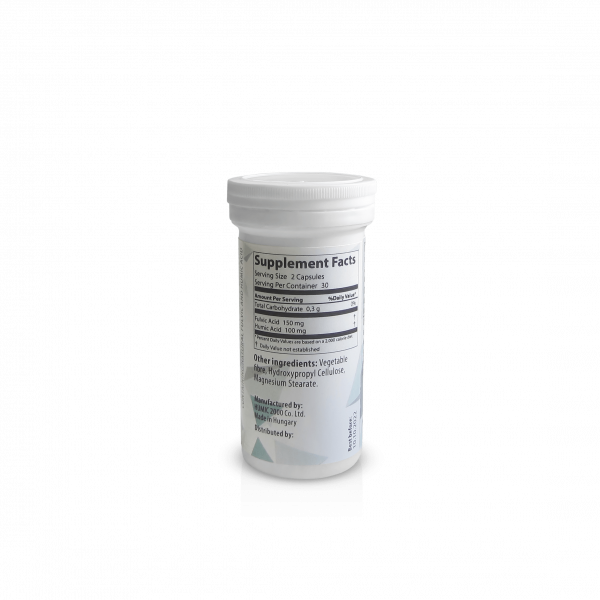 Humicin Pure is the best and safest form of heavy metal detoxification. Humicin is made with patented manufacturing technology using world-renowned Hungarian humic and fulvic deposits. Humicin removes divalent heavy metal ions from where they should not be. This enables health-promoting cations once again to occupy those positions. This unique binding affinity is why Humicin Pure is the gold standard in heavy metal detoxification. One jar contains 60 tiny vegetarian capsules, lasts 1 month. The quantity of humic acid and fulvic acid per capsule are listed in the description.

There is a mountain of scientific research on heavy metals in relation to human and animal heath. Heavy metal toxicity is a generic term for an above average level of metal in the blood. The problem is that heavy metals do not stay in your blood… they go into your fats. Heavy metals are systemic toxicants known to affect cellular organelles and components such as the cell membrane, the mitochondria, lysosome, endoplasmic reticulum system as well as the nuclei (RNA and DNA). For instance Dr. Fritz Lorscheider and Dr. Naweed Syed of the University of Calgary demonstrated how Mercury causes brain neuron degeneration (Hg binds to the GTP binding site on β subunit of tubulin molecules, this destroys microtubulin, this leaves behind denuded neurofibrils, these form tangles). The problem is that toxicity builds up slowly and, by inference, symptoms develop slowly. Thus dots may not be linked and causality may be overlooked. The most hazardous heavy metals and metalloids include divalent Hg2+, Cd2+, Pb2+, Cr2+, Ni2+, Cu2+*, Zn2+ and the trivalent As3+ (Arsenic).

The health-benefit of safer heavy metal detox with natural humic acid and fulvic acid is that Humicin Pure has a much greater binding affinity to heavy metals than it has to other ions. Thus Humicin Pure pulls bivalent heavy metals off your cellular organelles and components, and this heavy-metal-humifulvate-bond is unbreakable (no undesirable re-uptake). Your cellular organelles and components now have a vacant divalent binding site that can be reoccupied by a health-beneficial cation such as Mg2+, Fe2+, Zn2+, Se2+, Cr2+ or Ca2+. The heavy-metal-humifulvate-bond is excreted permanently via your liver and kidneys.

Heavy metals are widespread and persistent in our environments. Once persons are exposed to these metals, they are adept at entering cells and reaching the brain. Unsurprisingly research papers have titles such as “Patient with mild dementia a high incidence level of metal heavy as predictive reversal of cognitive decline”, “Heavy metals (Pb, Cd, As and MeHg) as risk factors for cognitive dysfunction”, “myelin breakdown: a developmental model of cognitive decline and Alzheimer’s disease”… Published in Biometals 2012 Jun;25(3):569-76. doi: 10.1007/s10534-012-9537-7 “patient with Multiple Sclerosis displayed elevated levels of aluminium, lead and mercury in the urine. Under treatment with heavy metal detoxification, the patient revealed in time improved symptoms suggestive of MS remission.”

Functions both prophylactically as well as therapeutically in viral diseases

Humic Acid is first a preventative, because it interferes with a virus’ ability to attach to a host cell, penetrate the host cell and reproduce itself. If a host cell is penetrated before the introduction of Humic Acid, the viral reproductive process within the host cell is not halted. However… if one has latently infected cells (i.e. those with chronic viral infections) and Humic Acid is present, once the host cell releases the new viruses into the bloodstream, Humic Acid helps prevent the new generation(s) of viruses from attaching to the cell wall, hijacking the DNA or RNA and reproducing, effectively lowering the body’s viral load over time and hence its therapeutic function for active viral infections.

In vitro studies have shown that if you allow varicella-zoster virus (VZV or HHV-3) to attach to host cells and then add Humic Acid to the solution, it will displace viruses from infected cell surfaces. This happens because Humic Acid has a greater affinity for the virus than the virus has for the host cell. [Source: Laub Biochem Specialty Labs, Humic Acid Inhibition of HSV Infection. 1998]. Preliminary in-vitro studies with Coxsackie A9 virus, influenza A virus and herpes simplex virus type 1 (HSV-1) have already shown that (Humic Substances) are effective against both naked and enveloped DNA viruses. [Klocking and Sprosig, 1972, 1975; Thiel et al., 1977]

Quality Control wise, the Humicin® product group was presented with 26 International Awards. For athletes it is important to know that Humicin® products are doping-free preparations tested by Wessling Environmental, Food Safety, Health and Quality Service laboratory. Customers who still remember the Humet-R syrup 300 ml bottle and Humet-R 30 capsules will feel reassured that the manufacturing technology for Humicin® was developed by János Szöllősy also.

Richard J Laub, MS, PhD, CChem, FRSC, is a chemist with nearly 150 peer-reviewed published research papers, sixteen patents, and numerous invited reviews and symposium presentations. He was formerly a professor of chemistry at The Ohio State University and San Diego State University, was a fellow of the Royal Society of Chemistry in London, England, was an Alcoa fellow in San Diego, and a Science Research Council fellow in Swansea, Wales. For the last 17 years, Dr. Laub has focused exclusively on sourcing, analysing, studying, extracting and purifying humic acid, a remarkable high-mineral, healing substance with potent antiviral properties, found in ancient soil deposits. Humicin® Pure is the gold standard for safer heavy metal detox with natural humic acid and fulvic acid.

The late Prof. Dr. Renate Klocking – Professor of Biochemical Virology at the Friedrich-Schiller-University Jena, Head of the Laboratory for antiviral testing in the Institut für Antivirale Chemotherapie at the Friedrich-Schiller-University Jena and Dr. rer. nat. Björn Helbig -PhD in Life Sciences- also researched the properties of humic and fulvic acids.

*Sure enough, at normal levels(!), Copper cycles between an oxidized state Cu2+ and reduced state Cu1+ because it is used by cuproenzymes involved in redox reactions.

Average adult dosage: 2 vegetarian capsules a day, by far the easiest is it to take Humicin last thing in the evening before going to bed. Otherwise take at least 30 minutes before food intake or 60 minutes after food intake. One serving is 2 capsules which provides 150mg Fulvic Acid and 100mg Humic Acid. Swallow the tiny capsules with ample of pure water (e.g. use a Brita filter). Humicin® Pure is intended to be taken as a course of three months. Multiple courses may be taken which depends on your heavy metal burden. In cases where faster heavy metal detoxification is desired or necessary, you can take 4 or 6 vegetarian capsules a day, just take 2 at any time and always away from food. For viral infections you take 6 capsules a day for at least 14 days.

An example of how to fit Humicin® Pure into your day: take 1-2 Aloeride Extra Strong first thing in the morning at your washstand (some 20-30 minutes before breakfast), have a clever smoothie and/or Juice Plus Premium during the day, take 2 Humicin® Pure capsules at your washstand before going to bed. You always take the Humicin® Pure on its own, this also means that you also take it 30 minutes away from any prescribed medication that you may be on. If for example you need to take 6 vegetarian capsules a day, then you take 3x 2 capsules on its own throughout the day. Via your Registered Healthcare Provider, Biolab Medical Unit can help you with the monitoring of your heavy metal burden/excretion.