“We initially trialed Aloeride on a horse which had terrible dermatitis on his legs and the recovery was incredible. We have seen improved coat condition and the horses just seem to shine from within. From a stable management point of view we try and keep everything simple, so Aloeride fits perfectly with this ethos. The far-reaching health benefits of feeding Aloeride will ensure that our horses will feel and look their best all year around, allowing us to focus on our busy competition schedule, assured they are getting the very best supplementary support.”

Lucy Cartwright, one of Great Britain’s most successful dressage riders is renowned for her empathetic riding and patient approach. Success came early for Lucy as a child rider in Pony Club and Dressage but her real equestrian career undoubtedly began in earnest at 16 years old when after completion of her GCSE’S she decided to pursue a Dressage career and was offered a job with Olympic Gold Medalist, Carl Hester, where she happily and successfully remained for 6 years. It was with Carl that Lucy’s talent and hard working approach was discovered. During this period Lucy was listed for both the Junior and Young Rider GB Squads, Champion at the Badminton Young Horse Finals riding the now Olympic Gold Medalist Valegro and won the Under 25’s National Championship twice to name just a few successes. 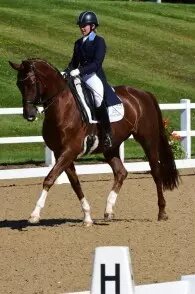 Click the picture to the left to enlarge it. Lucy Cartwright was in the ribbons again with Fergana where they won the Advanced 100 class with a fabulous score of 69.69%, read why she finds that Aloeride is an important aspect of her winning form!

In 2009 Lucy decided it was the time to move on from Carl’s to start her own dressage training business with the aim of training healthy, happy and of course successful equestrian athletes. Just months after leaving, Lucy was Summer British Dressage National Champion confirming to her that this was the right time to take this big step forward. Lucy is now available with a wide range of dressage services including training livery, competition livery, sales preparation, training of both horse and rider and clinics throughout the British Isles.