How to help your dog with aloe vera

Aloeride to the canine dermatitis rescue... 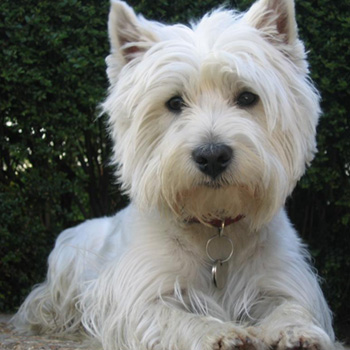 It was a few years after Aloeride Extra Strong was launched when a patient of Han van de Braak BSc LicAc MCSP MBAcC (Retd.) asked him if the aloe vera he makes could help her Westie (West Highland White Terrier). It had canine atopic dermatitis (CAD) which is a genetically-predisposed inflammatory and pruritic (itchy) allergic skin disease that is considered a lifelong problem. Can symptoms be avoided completely if one is brave enough to think and act upstream? If you too want to know how to help your dog with aloe vera, then this is the discussion Han had with Mandy… or go straight to Mandy’s solution for CAD.

“My Westie has suffered from really bad Atopic Dermatitis for several years, steriods, antibiotics, creams, lotions and potions have only ever had short term results but Aloeride capsules have made a huge difference to her. She is first to ask out in the mornings now instead of having to be lifted out, she bosses the other dogs, can walk on all 4 feet, sleep comfortably, her skin is now more pink than black and she no longer has the terrible odour associated with Atopic Dermatitis. I can’t recommend this product highly enough!!” (feedback from Mandy Baird dated August 29th 2012)

What is Atopic Dermatitis

Atopy is associated with the immune system over-producing a type of antibodies called IgE (or immunoglobulin E). Most commonly it is directed against environmental allergens such as house dust mites and pollens (Olivry and DeBoer 2001, Loewenstein and Mueller 2009). IgE allergies are immediate responses to a foreign substance that has entered the body (food or inhalation). Think peanut allergy! IgE levels may be elevated in mammals with parasitic infections (i.e. renders them more sensitive). The clinical features of atopy are variable but the permanent cardinal feature is itchiness. A dog may be itchy over its whole skin but more usually the itchiness is localised. The commonest areas to be affected are the ears, around the eyes, the muzzle, the underside of the neck and abdomen, the inside of the legs, the feet and under the tail [Nuttall et al 2009]. In general, around 10% of all dogs, whatever the breed, are affected [Scott et al 1995, Lund et al 1999] and there are many pedigree dog breeds that are predisposed to atopic dermatitis [Scott et al 1995, Hillier and Griffin 2001, Prelaud and Power 2008] of which the West Highland White Terrier is one.

Mandy’s Westie was prescribed topical and oral glucocorticoids often and, other than giving temporary relief, it worried Mandy that this had side effects e.g. skin becoming thin, coat becoming poor or thin, poor wound healing ability, developing obesity (increased hunger), increased susceptibility to opportunistic or secondary bacterial/fungal infections, predisposition to diabetes mellitus, increased chance of UTI to name but a few. Currently the routine veterinary medical approach is one or more of the following four options: 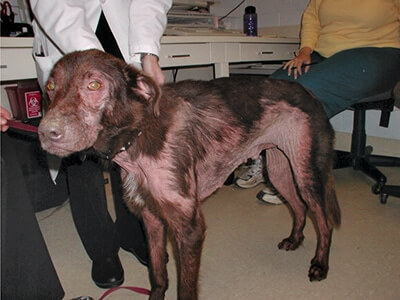 Canine atopic dermatitis (CAD) is an allergic skin disease associated with IgE and IgG antibodies to environmental allergens. IgG (or immunoglobulin G) are antibodies that provide long-term resistance to infections and have a much longer half-life (around 28 days) than the IgE antibodies in IgE related, acute allergy. Research published in the Journal of Veterinary Immunology and Immunopathology found that dogs with CAD did not have increased odds for high IgE against any of the allergens tested. This research also found that allergen-specific immunotherapy (ASIT) with Dermatophagoides farinae (that’s house mite) was associated with high DF-specific IgG1 but not with DF-specific IgG4 or decreased IgE levels. This ambivalence may explain why specific immunological therapy (SAIC) is not always as successful as hoped for. Newer studies show that interleukin IL-31 plays a significant role in CAD by inducing inflammation and pruritus in atopic dogs via activation of Janus kinase (JK) signal transduction. All of this is clever indeed (e.g. Apoquel is a new prescription drug containing oclacitinib maleate that inhibits JK), but everything seems to focus on managing downstream. Our view and suggestion is that you should look upstream for a solution.

A dog food sensitivity (IgG) is an adverse reaction to a food with no antigen-antibody response like you’d have in feed allergy (IgE). Approximately 80% of allergic dogs have a secondary bacterial infection at diagnosis which probably is the tipping point for the owners to take their dog to the vet. The most common ophthalmological secondary infection associated with atopic allergies is superficial pyoderma which is caused almost exclusively by Staphylococcus intermedius (it produces numerous toxins and acts as a superantigen) but increasingly Staphylococcus aureus and Staphylococcus schleiferi are involved. The common ground for these different bacterial species is the state of host resistance, the Locus Minoris Resistentiae that is referred to in Our Approach. It has been proposed to subdivide CAD into food-induced AD and nonfood-induced AD without as much as one study on changing the dog food and examining the clinical effect of this. Bacterial and yeast infections are common in atopic dogs, so perhaps you could turn that finding around… perhaps dogs with bacterial and yeast infections are more likely to develop canine atopic dermatitis.

Modifying the host immune response still is experimental and one new approach from the University of New South Wales involves increasing good regulating cells in the body. By injecting cell-signalling proteins, in particular cytokine Interleukin-5 (II-5 cytokine), the body’s immune system becomes better at regulating its response to disease without going into overdrive. It is known that, when certain parasitic helminths infect a host, they survive by evading your immuno-surveillance by switching off Toll like receptors (TLRs) and C-type lectin receptors (CLRs) and boost T-cell production. The process the researchers at University of New South Wales developed may be the same process that the helminths kick off. All is based on the Hygiene Hypothesis which is about healthy bowel flora and healthy microbiome, and symbiosis with parasites. That is where and why Aloeride comes to the help for dogs, and not just dogs with atopic dermatitis.

Here’s a snippet we pulled off a veterinary website: “Ten-minute, weekly baths with a shampoo containing antiseptics, lipids, and complex sugars were shown to reduce pruritus within 24 hours in 25% of dogs.” Never mind that 75% of dogs failed to respond… The very last thing you want to do with an animal that has atopic dermatitis is to shampoo it. The problem is that, as Mandy said, these poor animals reek. Soaps dissolve lipids. Shampoo containing lipids is nonsense, lipids are useful only when they come to the skin surface via the bloodstream which means that you need to feed them. I would be really useful if you would take our Safe By Sebum to heart…

You may have read that “soy is the most complete vegetable source protein typically used in pet food manufacturing, and is a more affordable source of protein than meat or eggs” which is why many dog foods contain it. A 2004 study analyzing 24 commercial dog foods containing soy found that these products contained concentrations of phytoestrogens in large enough quantities to have a biological effect on our pets [PubMed]. The idiotic thing is that soy came over form the Far East to become very fashionable in the West. Vast commercial growth meant extensive use of pesticides (high levels of the pesticide RoundUp have been found in GMO soy used in foods in the United States according to researchers in Norway [Elsevier publication, June 2014]), the bizarre thing is that the Far East uses only fermented soy. Fermented soy is not an oestrogen mimicker. Soy interferes with the thyroid gland’s ability to make T4 (thyroxine) and (T3) tri-iodothyronine, hormones necessary for normal thyroid function. In dogs, the result is hypothyroidism. Symptoms of too little thyroid hormone are depression, low body temperature and dry or itchy skin. Soy is antigenic (meaning it can stimulate the production of antibodies) which is not clever for conditions where IgG and JK are involved. That is why Mandy was advised to try the BARF/RMB diet… eliminate potential triggers. Eliminate formulas with corn meal, soy, wheat and grain (glycaemic index!), flour, dried beet pulp, animal by-product meal. Just like alfalfa meal guarantees that poor quality alfalfa is used, animal by-product is a long way off what the BARF or RMB diet serves.

Probable one of the best, no-nonsense articles on raw food (BARF/RMB) is the one written by Pippa Mattinson, author of many excellent training books on dogs. Click the pdf logo to open this very thorough article.

Antibiotics are the drug of choice in the treatment of any CAD crisis, these are used to treat associated skin infections (bacteria folliciulitis, BOG). What is clear that staphylococci are particularly adept at avoiding the effects of antibiotics. In particular, methicillin-resistant staphylococci have emerged as a serious medical problem. These staphylococci are able to develop and transfer resistance to numerous antibiotics by means of several divergent mechanisms. When antibiotic therapy is initiated, staphylococcus populations change in response to therapeutic pressure and the sensitive strains are eliminated while more resistant strains persist. Think MRSA…