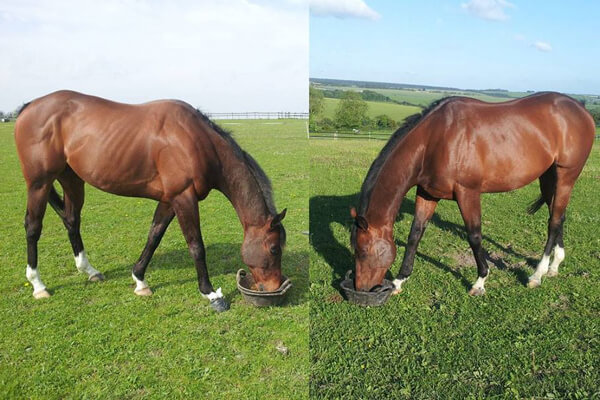 LEFT: Before Aloeride and the day after his first ODE looking too light to Chloë’s liking!
RIGHT: After a month on Aloeride (on less hard feed) looking fab! What a striking change in 1 month!
Chloë Ammonds-Nutt has become a Brand Champion for us and we have her mother Janice to thank for it! Janice owns Prophet whose longstanding digestive problems responded beautifully to Aloeride and she suggested that I’d talk to her Eventing and Blogging daughter… Beloware extracts from what Chloë wrote on her own blog:

I’ve dabbled with aloe vera products for myself (excellent as an after sun product, I found that out the painful way!) and my horses from time to time, but I’ve never used them consistently as part of my horse’s care or nutrition that is until now… I recently decided to trial a month’s supply of Aloeride supplement for Dustry because he had come out of the winter looking much leaner than I wanted and despite giving him three feeds a day, ad lib hay, and always making sure he wasn’t losing any condition by being appropriately rugged he wasn’t putting condition on as fast as I wanted. Initially I actually thought that maybe the Aloeride was driving him bonkers! In a rather misleading twist of fate, just as I started the course, the mares surrounding him all came into season and his hormones got the better of him and his behaviour deteriorated rapidly!

“I was 100% certain that Dusty standing on his hindlegs wasn’t a side effect of taking Aloeride. When it comes to calming, Aloeride always helps and never hinders. So we reviewed feeding in detail particularly as Chloë had emailed “When he has excess energy/is excitable rearing is his default thing unfortunately.” As it turned out Dusty’s ‘excess energy’ was sexually driven and was sorted by relocating two mares in season (they were on either side of his stable, poor thing).

Since then he has literally blossomed in front of my eyes. His condition is now just where I want it to be and he’s positively gleaming with health. The Aloeride has improved his health so much that I now only have to feed him half previous quantities as he’s now more able to get the most out of his nutrients which is helping him build more muscle. There have been noticeable behavioural changes also. He is all round much calmer and relaxed in himself and now only gets excited at understandable scenarios eg going in the lorry, jumping etc. I also feel like he’s much more forward going now, his lateral work is also less resistant in the initial first steps of a movement, and his jumping has gone from strength to strength.

Interestingly enough, it turns out that Aloeride isn’t paying for itself only for breeders and racehorse yards, Chloë also wrote “Dustry was on 3x feeds a day, 24/7 turn out in a huge paddock, ad lib hay when in the lorry and I was not happy with his condition. Now on just 2x small feeds a day, 24/7 turn out and his Aloeride aloe vera and just look at the difference!”