Here goes if you too are interested in Victoria Bax Eventing August Adventures: Earlier this year while coaching at a Riding Club camp, I was persuaded, more so begged to join part of the “Quad Squad” as their 4th team member is currently on maternity leave! I had no idea what I was letting myself in for, however, after a last minute change of horse for me which meant that Alberta’s Rose only had two practices and a 200-mile round trip returning home at 11.30pm last night – we did it! Not sure I’m ever going to live this down, but secretly I have to admit I rather enjoyed being part of it! 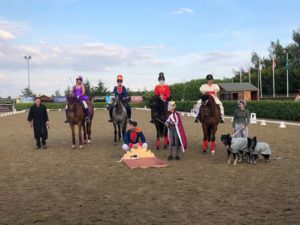 The brief we had for the Inter-County Freestyle event was “Toys and Games”; we chose to perform The Nutcracker. Who would have thought that the four-year-old, unbacked, full Thoroughbred that we bought at the Ascot sales in June 2014 predominately for eventing would turn her hoof to becoming part of a Quadrille! Alberta’s Rose certainly did not let me down as we finished a very respectable 2nd!

Later in the month, I was absolutely thrilled to pieces and so so very proud of my amazing little grey horse, Alberta’s Rose at Little Downham. She absolutely stood her own in a decent Novice section to produce a super dressage test for 28 penalties (72%) and an outstanding double clear with a handful of time penalties (which cost us the win) however finished superbly for 3rd place from 35 starters round a testing course which causes plenty of problems. I simply couldn’t be prouder of this girl; she has taken the step up to Novice this time completely in her stride. I think I’ve had the best three phases I have ever had with her, in fact probably any horse today. The dressage was supple and smooth, the showjumping positive and flowing and the cross country very confident. What an amazing young horse I have, and it feels fantastic to be back at a decent level again.

Our last trip this month was up to Swalcliffe in Oxfordshire, to contend the British Riding Club National Horse Trials Championships at 100+ level following our win in the Area qualifying event last month. Sadly having made the 140-mile journey there, I was hugely disappointed with the ground conditions. They had promoted that they would be aggravating the ground, but unfortunately, I could see no evidence of this, therefore leaving the ground in a very firm condition, not only on the cross country course but also the dressage and showjumping arenas and warm-up areas. As a result of this, I decided to withdraw following our dressage which had left us 5th going into the cross country day. This was obviously hugely disappointing as Alberta’s Rose is definitely on form this season and in my eyes stood an excellent chance of a great result. However, I was not prepared to risk causing her any damage considering every other event I have attended this season has made enormous efforts with the ground, and I have happily run at all of them.
So the long drive home began; A costly weekend!

Alberta’s Pride appears to be fit and well following the splint forming on his leg, so his work will be stepped up and back to normal including jump training as it has now been two months since it appeared. He will be aimed at Wellington BE100 at the end of this month, so I’m keeping everything crossed he feels fit and well on the day.

Still, lots more to look forward to this season, so until next time… best wishes, Victoria.